Hello my one reader!

Tonight was a good night, my belly was full and I was nice and rested.

I made some healthy attempts at Kanrethad tonight! My main issue, and what seems to be the crux of success or failure to this encounter were the dreaded dastardly Felhunters. My previous attempts a couple days ago were fraught with error. I let Bobby the Pitlord (oh CRAP I forgot to take a final screenshot of my best friend!) get in FRONT of the Felhunters on my failing attempts, and tonight what I did was set him on passive and move him BEHIND where they spawn.

Once they spawned, blow all cooldowns and maximize havoc to burst them down. It’s exactly the same on the 2nd wave (I am not geared just yet to take him down before the 2nd Felhunter phase, or perhaps I didn’t maximize my DPS beforehand).

On my 2nd last attempt, my freaking wi-fi died on me! It just…exploded! I quickly ran to my wired-connection computer and made a clean attempt.

The fight itself, was “intense” in that, I really wanted to get this over so I would stop stressing about it during the day. Occasionally I would find myself visualizing how I would position Bobby and the Felhunters, and how I would use cooldowns. It was annoying. I had to get this done and done for the sake of being a Warlock on the Internet.

Once I managed to get him down below 20%, I hadn’t even realized that I was quite tense, my heart rate was increasing but I knew I had to stay calm for the final Felhunter phase and not worry about embers being wasted. In desperation I sent Bobby the Pitlord to stun all three of the hunters, and managed to run to my magical portal to LOS Kanrethad’s final chaos bolt. One more cataclysm and a stun later, he had been banished! 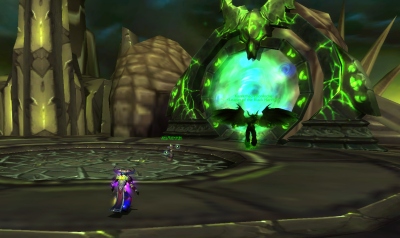 The ending is kind of anti-climactic, and didn’t really provide a lot of juicy graphics for screenshots but….yeah.

But now I am free to do other things, like dailies and….oh dear.