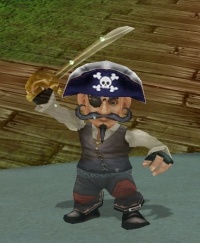 Who’s that crazy snazzy Gnome pirate you ask? Why that’s Burgy Blackheart! He’s a rare spawn in the Shimmering Depths in Vash’jir who drops a Fun Hat!﻿ This hat turns you into an exact replica of him, an oversized pirate ghost gnome. It’s a permanent “curse” so long as you have the hat equipped, meaning you’ll lose out on DPS with it on but who cares! When you mount up with this hat on your mount is slightly larger and also ghostly transparent!

As I was queueing for a heroic on me hunter, I had been swimming around Vash’jir for who knows what reason and my NPC Scan went blaring for about three rare spawns in Burgy’s general area. Burgy’s went off last as my queue went off and I brushed it off thinking “Oh its probably some dumb captain with no cool item drop”.

As our group prepared for the heroic I quickly wowhead searched this NPC’s name and realized I had given up this awesome hat! “GRRR all for 70 STUPID Valor Points” I though! I went back to his spawn point after the heroic and alas he had despawned. “But…a hat that turns me into an awesome pirate gnome! (My hunter is a troll by the way) I missed it grrr!”

So I logged out at his spot for a couple days and circled his boat in vain until one day upon logging in and having cleaned my cache, the scanner goes off and my initial reaction was to dismiss my pet, as is the habit when I find a new pet to tame and I have a pet out. But I remembered who I was looking for and sent my pet after him and followed my pet.

So yeah, if you want to look like a pirate ghost gnome with 25% increased size go look for him.