I’ve been sick lately, and in my feverish stupor I had an odd dream.

I was clicking around reading blogs and specifically Fulgaris over at Killing ’em Slowly was describing one of the new heroic mode raids out. I’m not sure why that specific blog, but that’s just what happened. I am unsure of the raid name but I do know that its widely known as “Soundbox” for its heroic mode. In this alternate reality, the term “Soundbox” is widely used such as “Heigan Dance” or “Yogg +3”. “Soundbox” was the ultimate heroic achievement and it was being described in detail in this video. 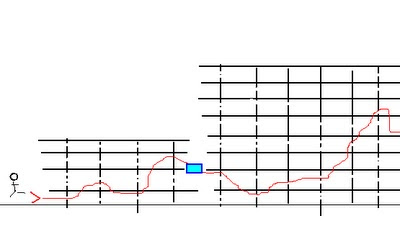 Imagine a huge huge sidescrolling room. You are the little stick figure at the very left end of the room. The two “grids” you see are actually stone beams with stone columns supporting them and they are HUGE. The ones represented inthe illustration is compressed for time and my artistic ability issues. Probably 250 feet high for the first structure and double that for the second structure.

The stone columns are not 100% solid as you can see holes in them, this is part of the raid mechanic. This raid also takes place in 2D action, and every raid member gets a randomly generated room, separate from their companions.

Normal Mode: The trick to clear this raid is to listen to the music, and “swim” through the pillars and columns based on what note you are currently hearing (treble). So essentially if you hear an F you’d swim a little bit up if you hear a C4 you’d swim higher and so on and so forth. You only have about a 0.5-1.0 second lag to get to the current note and your swim speed will adjust to the current tempo of the music so that you’ll always be at the next note whether you’re right or wrong. The music that the encounter I saw was that of Vash’jir for the first structure, slow and mellow, then for the larger structure it gets difficult and culminates into something akin to Beethoven’s Sonata 5 in C Minor, Op. 10 No. 3. Aka very rapid, prestissimo to be exact. (Think 10x the Seahorse Mount speed) (ABRSM Nightmares?)

To clear the raid you must achieve a relatively high accuracy to the notes played and you receive your phat lewtz at the end.

Heroic Mode: The only difference in Heroic Mode is the “Sound Box”, depicted by the blue box in the middle of the room. If you completed the first structure correctly you should be swimming towards the Soundbox and at that moment the Soundbox will blast a high pitched frequency at your character, and after a 2 second countdown (ironically) for the next 10 seconds you will hear no sound but you must continue onto the 2nd structure since the music is playing secretly in the background. YOU MUST GUESS what is playing after only hearing the 2nd tune for 2 seconds and you must also recover correctly once the sound resumes.

So there we have it, I’ve designed a raid where not only do you need to be fairly musically oriented but also clairvoyant! And great 2D swimming skills.